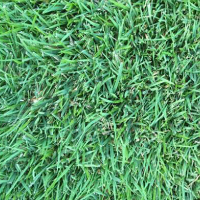 This highly sought after species is loved for its low-maintenance, hardy nature, bright colouration and soft feel.

Originally from Swaziland in Africa, Tropika is perfectly suited to the Central Queensland climate (which is roughly on the same latitude).

It is suitable for both commercial and domestic use but is not recommended for very shady areas as it has a shade tolerance of only 50%.

Tropika Blue Couch is the same colour and shape as Queensland Blue Couch, but because it is from Africa, it is able to withstand extreme conditions better and doesn’t require as much maintenance as its Australian counterpart. It requires minimal fertilisation and can handle irregular mowing.

Tropika is able to maintain its beautiful lime to blue colour in a wide range of soil conditions, including low nutrient sandy coastal soils and clay soils with well-draining topsoils. This makes it an excellent choice for home lawns, schools, roadsides and parks in Queensland.

This type of grass is allelopathic, meaning that it emits chemicals that naturally resist weed growth. Tropika can also handle a significant lawn grub burden without being affected.

As a species that has evolved under irregular rainfall conditions, Tropika has adapted well to dry weather. During periods with little rain, Tropika Blue Couch will not thin out and die. It remains dense and quickly comes back to life after exposure to rain or adequate irrigation.

Unlike some grasses which spread into garden beds underground, Tropika spreads above ground via stolons. This means it won’t take over gardens and can easily be removed if it spreads to areas where it is not wanted.