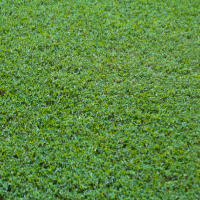 TifTuf is a beautiful grass that has many assets, chief of them is its drought tolerance. Testing has shown that TifTuf uses 38% less water than similar couches. By growing TifTuf uses physiological adaptive mechanisms like growing deeper roots and going dormant during drought to reduce irrigation 'events', saving you water over time. The reduced water needs mean a significant cost saving after installation, the savings in water bills over a 3 year period may cover the cost of the TifTuf purchase when compared with other grasses like Wintergreen Couch.

Rapid regrowth and dense surface growth after a disturbance make TifTuf superior in wear tolerance to other Couch varieties. TIfTuf's canopy is dense, and the leaves are upright; both morphological features helping it hold up better to constant wear. Tiftuf quickly recovers from sustained damage when watered and fertilised to promote lateral growth.

Couch is not renowned as shade-tolerant grass but TifTuf has been growing in areas of low light where other couch grasses would not survive. TifTuf has been seen to survive in areas of 50% light transmission. This ability to survive and grow in situations of reduced sunlight improves the wear recovery of TifTuf. During spring, TifTuf breaks dormancy strong and healthy and often earlier than other couches. For autumn dormancy, it stays greener further into the autumn, by several weeks longer than other similar grasses in extremely cold climates.